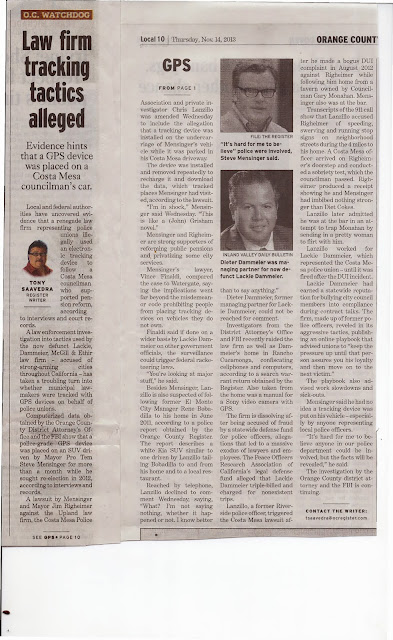 Evidence hints that a GPS device was placed on a Costa Mesa councilman's car.

A law enforcement investigation into tactics used by the now defunct Lackie, Dammeier, McGill & Ethir law firm - accused of strong-arming cities throughout California - has taken a troubling turn into whether municipal lawmakers were tracked with GPS devices on behalf of police unions.

Computerized data obtained by the Orange County District Attorney's Office and the 'BI show that a police-grade GPS device was placed on an SUV driven by Mayor Pro Tern Steve Mensinger for more than a month while he sought re-election in 2012, according to interviews and records.

A lawsuit by Mensinger and Mayor Jim Righeimer against the Upland law firm, the Costa Mesa Police Association and private investigator Chris Lanzillo was amended Wednesday to include the allegation that a tracking device was installed on the undercarriage of Mensinger's vehicle while it was parked in his Costa Mesa driveway.

The device was installed and removed repeatedly to recharge it and download the data, which tracked places Mensinger had visited, according to the lawsuit.

"I'm in shock," Mensinger said Wednesday. "This is like a (John) Grisham novel."

Mensinger and Righeimer are strong supporters of reforming public pensions and privatizing some city services.

Mensinger's lawyer, Vince Finaldi, compared the case to Watergate, saying the implications went far beyond the misdemeanor code prohibiting people from placing tracking devices on vehicles they do not own.

Finaldi said if done on a wider basis by Lackie Dammeier on other government officials, the surveillance could trigger federal racketeering laws.

"You're looking at major stuff," he said.

Besides Mensinger, Lanzillo is also suspected of following former El Monte City Manager Rene Bobadilla to his home in June 2011, according to a police report obtained by the Orange County Register. The report describes a white Kia SUV similar to one driven by Lanzillo tailing Bobadilla to and from his home and to a local restaurant.

Reached by telephone, Lanzillo declined to comment Wednesday, saying, "What? I'm not saying nothing, whether it happened or not. I know better than to say anything."

Dieter Dammeier, former managing partner for Lackie Dammeier, could not be reached for comment.

Investigators from the District Attorney's Office and FBI recently raided the law firm as well as Dammeier's home in Rancho Cucamonga, confiscating cellphones and computers, according to a search warrant return obtained by the Register. Also taken from the home was a manual for a Sony video camera with GPS.

The firm is dissolving after being accused of fraud by a statewide defense fund for police officers, allegations that led to a massive exodus of lawyers and employees. The Peace Officers Research Association of California's legal defense fund alleged that Lackie Dammeier triple-billed and charged for nonexistent trips.

Lanzillo, a former Riverside police officer, triggered the Costa Mesa lawsuit after he made a bogus DUI complaint in August 2012 against Righeimer while following him home from a tavern owned by Councilman Gary Monahan. Mensinger also was at the bar.

Transcripts of the 911 call show that Lanzillo accused Righeimer of speeding, swerving and running stop signs on neighborhood streets during the 4 miles to his home. A Costa Mesa officer arrived on Righeimer's doorstep and conducted a sobriety test, which the councilman passed. Righeimer produced a receipt showing he and Mensinger had imbibed nothing stronger than Diet Cokes.

Lanzillo later admitted he was at the bar in an attempt to trap Monahan by sending in a pretty woman to flirt with him.

Lanzillo worked for Lackie Dammeier, which represented the Costa Mesa police union - until it was fired after the DUI incident.

Lackie Dammeier had earned a statewide reputation for bullying city council members into compliance during contract talks. The firm, made up of former police officers, reveled in its aggressive tactics, publishing an online playbook that advised unions to "keep the pressure up until that person assures you his loyalty and then move on to the next victim."

Mensinger said he had no idea a tracking device was put on his vehicle - especially by anyone representing local police officers.

"It's hard for me to believe anyone in our police department could be involved, but the facts will be revealed," he said.

The investigation by the Orange County district attorney and the FBI is continuing.


Posted by Legal Support Investigative Service at 10:14 AM No comments: Links to this post 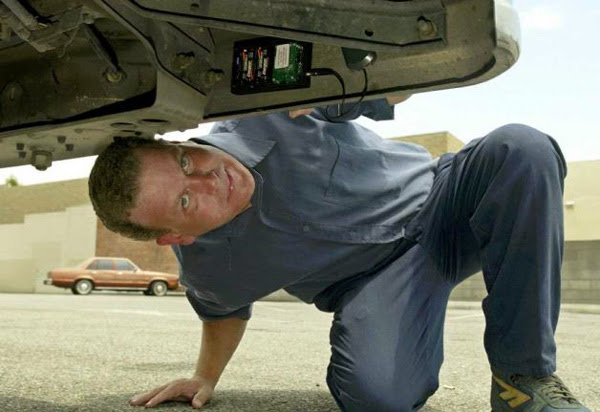 An Upland law firm accused of bullying civic leaders faced new accusations Wednesday of planting a GPS device on the car of a Costa Mesa city official as a way to intimidate him.

In an amendment to an existing lawsuit, Costa Mesa Councilman Steve Mensinger said the device was affixed to his car during the entire 2012 election season and only came to his attention when he was alerted by the Orange County district attorney’s office.

In the amendment, which was first reported by the O.C. Weekly, Mensinger's attorney said the device was designed to “intimidate, harass, humiliate and threaten" his client.

“Watergate, that’s when I last heard about something like this happening,” said Vince Finaldi, the Irvine attorney who filed the suit and amendment.

The firm has represented dozens of police unions in Southern California and has a reputation for its bare-knuckled tactics and attacks on city hall. At the time of the accusations, the firm was employed by the Costa Mesa Police Officers' Assn.

Investigators with the Orange County district attorney’s office raided the offices of the Upland law firm a month after it announced that it would be dissolving following a series of scandals and the lawsuit.

Since last year, prosecutors have examined accusations that a private investigator (Chris Lanzillo) who had worked with Lackie, Dammeier, McGill & Ethir tailed Costa Mesa Mayor Jim Righeimer from a local bar and called 911 to say the then-councilman was possibly driving drunk.

After the call, a police officer came to his door and asked Righeimer to take a sobriety test, which he passed. Righeimer later produced a receipt from the bar showing he had only bought a soda at the tavern.

Attorneys for Righeimer and Mensinger believe the GPS device allowed the firm to follow the pair to Skosh Monahan’s on the night of the 911 call.

The amendment also accuses Lackie, Dammeier, McGill & Ethir of intruding onto Mensinger’s property because the GPS device needed to be charged and downloaded.

Posted by Legal Support Investigative Service at 10:07 AM No comments: Links to this post