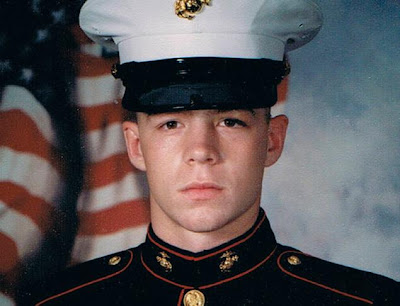 MIAMI — A South Florida family is fighting to get their son, a Marine veteran, released from a prison in a dangerous area in Mexico while facing charges that he carried across the border a shotgun with a barrel that’s an inch too short.

Jon Hammar and his friend were on their way to Costa Rica in August and planned to drive across the Mexican border near Matamoros in a Winnebago filled with surfboards and camping gear. Hammar, 27, asked U.S. border agents what to do with the unloaded shotgun, which his family said belonged to his great-grandfather.

“They examined it, they weighed it, they said you have to fill out this form,” his father, Jon Hammar, told The Associated Press in a phone interview Tuesday from his home near Miami.

But when the pair crossed the border and handed the paperwork to Mexican officials, they impounded the RV and jailed the men, saying it was illegal to carry that type of gun. Hammar’s friend was later released because the gun did not belong to him.

The family’s attorney said Mexican law prohibits civilians from carrying certain types of guns, such as sawed-off shotguns, which can be more easily concealed. Mexican law prohibits shotguns with a barrel of less than 25 inches (63.5 centimeters). Family attorney Eddie Varon-Levy said Mexican officials measured the barrel on Hammar’s shotgun as 24 inches (61 centimeters). It has not been sawed off.

Family members said the gun was purchased at Sears and blamed U.S. officials for telling Hammar he could bring it across the border in the first place.

Varon-Levy also questioned the way Mexican officials measured the gun, because the measurements can differ depending on where they are taken on the barrel.

He said dealing with Mexican authorities has also been difficult. He said Hammar was brought to court a few weeks ago, where officials tried to convince him to plead guilty without a lawyer present. Varon-Levy said he didn’t show up because he was told there was a continuance.

Hammar could face 12 years in prison, but Varon-Levy said that’s unlikely. He wants to get the charges downgraded, hoping Hammar can plead guilty to a lesser charge of carrying an unregistered weapon, which carries only a fine.

Hammar served in Iraq and Afghanistan before being honorably discharged from the Marines in 2007. His mother said surfing helped him cope after he was diagnosed with post-traumatic stress disorder.

“Mexican authorities have fully guaranteed his right to Consular assistance; therefore Mr. Hammar has been in contact with U.S. Consular officers in Mexico who have regularly visited him,” Ricardo Alday, spokesman for the Mexican Embassy, said in a statement. “The possession of any weapon restricted for the use of the Army in Mexico is a Federal crime, regardless of whether you declare it or not upon entering the country, and must be automatically prosecuted.”

Alday said Harmmar was detained in Tamaulipas “and as any other detainee facing criminal charges he has the right to defense counsel and a fair trial. In addition, his life and integrity are protected by national and international laws.”

Meanwhile, Hammar is being held in one of the most dangerous areas in Mexico.

Matamoros is the long-time headquarters of the Gulf Cartel, which has been engaged in a bloody struggle with its former security guards, the Zetas, since early 2010 for the lucrative drug routes along the eastern end of the Texas-Mexico border. An October 2011 fight among inmates at the prison left 20 dead and 12 injured.

At first, Hammar was held with the general population, filled mostly with members of drug cartels. Now he is periodically chained to his bed in a cell by himself, said his father, who speaks with his son by phone occasionally.

“Sometimes he’s got his head on good. We’re like just, ‘Hang in there. We’re doing everything we can.’ Other days, it’s like, it’s not as good,” Jon Hammar said, sighing heavily and struggling to steady his voice.

“‘Lady, this isn’t about the police. This is our house. We have your son. We’re going to kill him if you don’t send us money,’“ Hammar said, recounting the phone call.

The couple planned to wire the money to an account, but officials at the U.S. consulate intervened and contacted prison officials. His son was moved into a private cell the next day, he said.

A spokesman for the State Department said officials have visited Hammar three times, spoken with him by phone and contacted prison officials to stop them from chaining him to the bed.

“The safety and well-being of U.S. citizens is something we take very seriously,” said Peter Velasco.

U.S. Rep. Ileana Ros-Lehtinen also urged the State Department to work incessantly to reunite Hammar with his family and said she’s disappointed the agency has not told her what efforts have been made.

The Miami Republican said she plans to contact the Department of Homeland Security and Customs and Border Patrol about Hammar’s arrest. His mother emailed Ros-Lehtinen and asked for help.

“The Hammar family has suffered a great deal since their son’s unjust incarceration in August and the details they have provided to my office are gripping and a clear abuse of Jon’s human rights,” she said in a statement.

Associated Press Writer Christopher Sherman in McAllen, Texas, contributed to this report.
Posted by Legal Support Investigative Service at 9:18 PM No comments: Links to this post