An Ohio woman is suing her ex-husband after she said he spied on her with a hidden video camera, microphone and a GPS for months in their home. 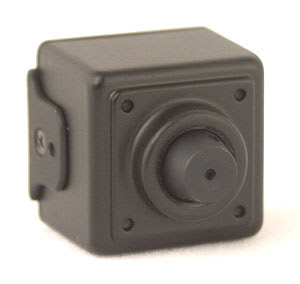 Cathy Zang learned about the recordings during their 2009 divorce proceedings after 14 years of marriage, according to the Cincinnati Enquirer. Her ex-husband, Joe Zang, a homebuilder in Ohio, admitted to installing all the equipment, but denied doing anything wrong, according to court documents.

After learning of the secret recordings, Cathy Zang searched her home and found numerous recording devices.

"There it is! There it is! I found it. In the eye hole right here on the plug, I mean outlet," said her son, Zach Holbrook, on the recording.

"He [Joe Zang] put small microphones and small cameras in wall outlets and disguised them as actual wall outlets. It's a complete view of the computer area, the kitchen area, the living room area," said Cathy Zang's attorney, Don Roberts.

Joe Zang and his attorney did not return ABC News' calls.

One secret recording in particular captured a vicious fight between the couple, including the exact moment the police showed up during the dispute.

"You grabbed me and you shook me and you pushed me. Good God, what is wrong with you?" Zang could be heard asking her husband in the recordings.

While the Zangs' divorce is now final and out of court, the recordings are at the center of a federal court battle over the right to privacy amidst 21st century technology.  Two lawsuits are now pending in U.S. District Court that involve nearly a dozen of the former couple's friends and family and a computer monitoring software company, as first reported by the Cincinnati Enquirer.

One suit was filed by Javier Luis, a Florida man whose online conversations with Cathy Zang were monitored, while the other was filed by Zang herself.  Both lawsuits seek hundreds of thousands of dollars  for wiretapping and invasion of privacy, the Enquirer reports.

"He was hacking into my personal computer account and getting into my e-mail. At some point he had a GPS on my car," Cathy Zang told ABC News.

"There are some embarrassing things that I wouldn't want other people to see because I was in the privacy of my own home," she said.

It's not clear what laws Joe Zang has broken since he installed the devices in his own home.

When both people share the same computer, purchased it together? It's very difficult for a prosecutor then to say, well you have committed a crime against this other person," said legal analyst Sunny Hostin, a former federal prosecutor.

Ohio and federal wiretapping laws permit audio recording as long as one of the parties in the conversation is aware of the recording.

HIDDEN AUDIO VISUAL RECORDINGS:   California's wiretapping law is a "two-party consent" law. California makes it a crime to record or eavesdrop on any confidential communication, including a private conversation or telephone call, without the consent of all parties to the conversation. See Cal. Penal Code § 632. The statute applies to "confidential communications" -- i.e., conversations in which one of the parties has an objectively reasonable expectation that no one is listening in or overhearing the conversation. See Flanagan v. Flanagan, 41 P.3d 575, 576-77, 578-82 (Cal. 2002).  A California appellate court has ruled that this statute applies to the use of hidden video cameras to record conversations as well. See California v. Gibbons, 215 Cal. App. 3d 1204 (Cal Ct. App. 1989).


COMPUTER SPYWARE:   A miss-concept between many P.I.s, attorneys and the general public is that when married, you can record your spouse, install spyware on community computers to view emails, IM, keystrokes, passwords, etc.  Regardless if two people are married, the spouse does not automatically forfeit his/her right to privacy.   If one spouse does not share their password to a private account with the other, they DO have an expectation of privacy.  Ca Penal Code 502(c)(2) prohibits access to a computer, computer system, to take, copy, or use any data without permission.


CALIFORNIA GPS LAWS:  637.7.  (a) No person or entity in this state shall use an electronic tracking device to determine the location or movement of a person.

(b) This section shall not apply when the registered owner, lessor, or lessee of a vehicle has consented to the use of the electronic tracking device with respect to that vehicle.

(d) As used in this section, "electronic tracking device" means any device attached to a vehicle or other movable thing that reveals its location or movement by the transmission of electronic signals.

(e) A violation of this section is a misdemeanor.


http://gma.yahoo.com/blogs/abc-blogs/woman-sues-ex-over-trove-secret-tapes-141340634--abc-news-topstories.html
Posted by Legal Support Investigative Service at 9:32 AM