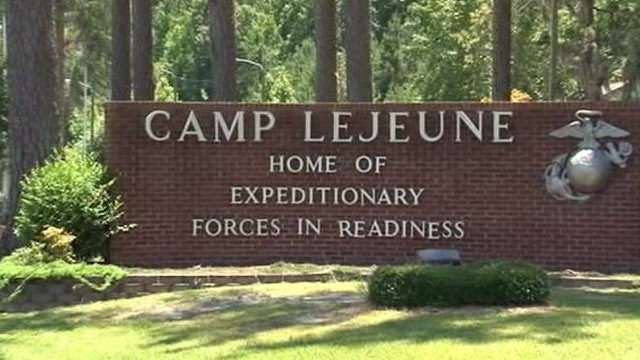 Camp Lejeune, a military base in North Carolina, is home to hundreds of thousands of Marines and their families. It's also the site of what may be the largest water contamination in American history.

Now, nearly three decades after poisons were discovered in their drinking water, Congress is set to vote on legislation that will provide health care to those who suffered.

From the 1950s to the mid-1980s, the Marines who lived on the base with their families drank water laced with cancer-causing chemicals. Hundreds of thousands of Lejeune residents were exposed over the 30-year stretch. Many died and others are still getting sick today.

The Marine Corps doesn't often talk about the base's water contamination history. But two men with ties to Camp Lejeune, Jerry Ensminger and Mike Partain, have worked tirelessly to get the word out to Lejeune alumni -- maybe as many as a million people -- who may have been exposed. For both men, the mission is personal.

Ensminger is a career Marine who raised his family at Lejeune. His daughter Janey died of leukemia when she was just 9 years old. She died in 1985, just shy of her 10th birthday. "She said, 'I love you.' I said, 'I know.' I whispered in her ear, and I said, 'It's time to stop fighting,'" he said.
PHOTO: Camp Lejeune, a military base in North Carolina, is home to hundreds of thousands of Marines and their families. It's also the site of what may be the largest water contamination in American history.

"After I had time to sit and think about it, I did what any normal human being would do, I started wondering why," Ensminger said. "That nagging question of 'why' stayed with me through [Janey's] illness, through her death."

Ensminger said his first clue came from a local TV station's report in 1997, saying that contaminants discovered in the base's drinking water had been possibly linked to childhood cancer and birth defects, primarily leukemia.

"I dropped my plate of spaghetti right there on the living room floor," Ensminger said. "That started this journey for the truth."

He was soon joined by Partain, who also had cancer -- breast cancer, which is extremely rare among men. Partain's father was stationed at the base when his mother became pregnant and gave birth to him there, but he's lived most of his life in Florida, where he's an insurance adjuster.

His life's work, though, has become a search for answers about what happened in the water and how it has affected his own health and those of thousands of others. Through his own research, Partain has documented 80 cases of male breast cancer among men who were born or served at Camp Lejeune.

The Marine Corps dragged its feet in contacting and alerting those who had lived at Lejeune about the water contamination and the possible health consequences. So Ensminger and Partain decided to team up and help get the word out. Their efforts are the focus of a 2011 documentary, "Semper Fi: Always Faithful," which was short-listed for an Oscar.

But it is already too late for some of the tiniest victims. During the years when the water was contaminated, stillborn babies were commonplace on the base, so many that the local cemetery has a section locals call Baby Heaven, lined with the graves of children who never made it to their first birthdays.

Mary Freshwater was a young mother who lived on the base back in the 1970s. She said she and the other women at Camp Lejeune suspected something was terribly wrong.

"I was very active with the Officers' Wives Club. We were at a party at one of my friend's house one night. There were five of us in different stages of pregnancy. Every one of us lost their baby to a birth defect," she said.

For Freshwater, it was an unbearable pain she suffered not once, but twice.

On Nov. 30, 1977, she gave birth to a son, Russell Alexander Thorpe, but the baby was born with an open spine. All she has left of him now is a small suit he was wearing the day he died – just 10 minutes past midnight on New Year's Eve, 1977.

"It was really a shocker when he was born that way and then when he died, he died in my arms. He took his last breath," she said.

Freshwater said doctors encouraged her to get pregnant again and she eventually gave birth to a second son -- Charlie, who was born without a cranium, and died the same day.

Today, Freshwater is 68 years old and has been diagnosed with two different kinds of cancers, acute myeloid and acute lymphoma. She says doctors told her the diagnosis was consistent with exposure to chemicals such as benzene, which she was exposed to during her time at Camp Lejeune.

"I am angry, but you can't let that destroy you," she said. "That won't bring my babies back and it won't cure me."

Representatives from the Marine Corps, the Secretary of the Navy and the Department of Veterans Affairs all declined to talk to "Nightline" about Camp Lejeune on camera.

In an email statement, one Marine Corps representative wrote that General James F. Amos, the Commandant of the Marine Corps, "considers this issue to be very important" and that "we continue our commitment to find and notify those who used the water during the time period in question."

For years, there has been a bureaucratic battle over which agency should be responsible for funding the health care of those affected by the contamination: the Defense Department, which owned the base, or the Department of Veterans Affairs, which covers service-connected illness, injury and disability. But a deal for the VA to cover those costs is now in the works, negotiated by the House and Senate Committees for Veterans Affairs.

The health care provision, which is part of a larger bill addressing veterans issues, covers those who lived or worked on Camp Lejeune for at least 30 days from Jan. 1, 1957, through Dec. 31, 1987. The Senate is expected to pass the bill as early as this week, and it will head to the president's desk after the 4th of July, according to Congressional staffers.
Posted by Legal Support Investigative Service at 9:00 PM No comments:

Do you remember the greatest play in baseball history?

On April 25, 1976 at Dodger Stadium, Rick Monday of the Chicago Cubs, grabbed and secured the American flag from two individuals as they were attempting to burn our flag in the middle of the playing field. It was an outstanding display of American Patriotism.
Posted by Legal Support Investigative Service at 2:58 PM No comments: