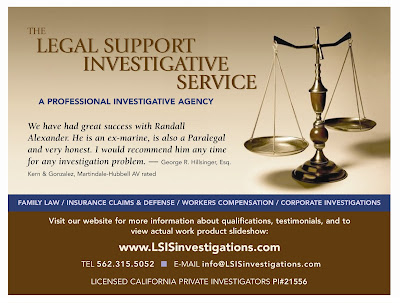 Posted by Legal Support Investigative Service at 10:47 AM No comments: Links to this post

The Marine Corps encourages all those who lived or worked at Camp Lejeune before 1987 to register to receive notifications regarding Camp Lejeune Historic Drinking Water.

LINK: To Register if you served at Camp Lejeune before 1987

This section provides background information on how contaminants were first discovered in water systems at Camp Lejeune, the sampling that has followed and the closing of effected wells. Other scientific information on the water testing and chemicals that were found, in addition to, Marine Corps actions and decisions are detailed in this section.

In 1979, the Environmental Protection Agency (EPA) published interim standards for total trihalomethanes (TTHMs) (disinfection byproducts from water chlorination). Based on this ruling, Camp Lejeune began to monitor for TTHMs in November 1982 and was in full compliance with applicable requirements by November 1983. To prepare for the compliance requirements, the Atlantic Division - Naval Facilities Engineering Command (LANTDIV) contracted water quality testing with the U.S. Army Environmental Hygiene Agency and Jennings Laboratories. The sampling initiative began at Camp Lejeune in July 1980.

From 1980-81, TTHM sampling was performed at Camp Lejeune's Hadnot Point and New River water treatment plants. Various other points in the water distribution systems were also sampled. Volatile organic compounds (VOCs) were identified as interference (i.e., an influence by chemicals other than TTHMs) in the TTHM sampling from Hadnot Point. In February 1982, LANTDIV recommended Camp Lejeune to initiate contractual agreements to begin TTHM monitoring through a North Carolina-certified laboratory. Camp Lejeune initiated this TTHM sampling in spring, 1982 with Grainger Laboratories. The first sets of TTHM samples, obtained in April 1982, were collected at various points which included the water treatment plant effluent, pumping stations, and various sinks. No individual wells were sampled.

In May 1982, the Grainger Labs TTHM analyses revealed VOC interference. Tetrachloroethylene (PCE) and trichloroethylene (TCE) were identified in samples from Tarawa Terrace and Hadnot Point. In August 1982, Camp Lejeune received the samples’ analytical results, which quantified TCE and PCE concentrations from Grainger Labs. Further Tarawa Terrace and Hadnot Point TTHM testing resulted in sporadic interference by VOCs. Due to sampling completed in summer 1982, levels of PCE averaged approximately 90 ug/L in the Tarawa Terrace system and levels of TCE averaged 20 ug/L in the Hadnot Point system. (Camp Lejeune did obtain one sample indicating TCE at 1400 ug/L on May 27, 1982. This sample is not included in the average because the Base chemist who reviewed the analysis saw it as an anomaly.) Although no regulatory standards were established for either of these chemicals at the time, EPA published a SNARL (Suggested No-Adverse Response Level) for both TCE and PCE. Comparison of the average PCE and TCE concentrations with the respective SNARLs revealed Hadnot Point’s water below the long-term TCE SNARL and Tarawa Terrace’s water was between the 10-day and long-term PCE SNARL.

In August 1982, Camp Lejeune had reason to suspect that the appearance of PCE concentrations in the water samples could have resulted from the use of coated asbestos-cement pipe in the Tarawa Terrace raw water lines. Further discussion regarding the potential source of these compounds led to: continued sampling and analysis of the drinking water systems, additional sampling and analysis of the water supply, and the acceleration of the Naval Assessment and Control of Installation Pollutants (NACIP) Program at Camp Lejeune (established to identify areas of the Base which required cleanup).

Camp Lejeune continued to use Grainger Labs for TTHM sampling through 1982 and analyzed over 200 samples to ensure TTHM compliance. The analytical results from this sampling showed VOC interference in certain samples. During this time, Camp Lejeune evaluated the water treatment plants for potential sources of VOCs (e.g., paint, solvents used in equipment, and sources from other operations), performed inorganic chemical and corrosively analyses, and continued planning for various infrastructure replacements at the Tarawa Terrace and Holcomb Boulevard water treatment plants. Camp Lejeune remained in contact with North Carolina’s Water Supply Branch (Division of Health Services, Department of Human Resources), which had primacy over the Safe Drinking Water Act [SDWA] in NC, and also monitored other SDWA water quality requirements (e.g., metals, pH, etc.). Camp Lejeune’s water systems were in full compliance with SDWA requirements at this time.

In January 1982, the NACIP Program at Camp Lejeune began to identify potentially contaminated sites on the base. In 1983, the NACIP initial assessment study was published. This study led to the subsequent sampling of individual water supply wells in 1984. A direct association between VOCs in the Hadnot Point and Tarawa Terrace drinking water and VOCs in the wells and groundwater was established when the water supply wells were sampled (beginning in 1984). The Base confirmed the wells impacted by VOCs and shut them down in late 1984 and early 1985.

This section illustrates the methods and procedures of the Agency for Toxic Substances and Disease Registry (ATSDR) as a result of the discovery of chemicals in Camp Lejeune base water systems. Information on the previous health assessment, study, and survey leading up to the current ATSDR study are also found in this section.

In 1997, a public health assessment (PHA) was completed by ATSDR at Camp Lejeune. The ATSDR was particularly interested in routine drinking water tests (conducted in the 1980s) that found volatile organic compounds (VOCs) at detectable levels in some on-base drinking water supply wells.

On April 28, 2009, ATSDR announced that they were removing the 1997 PHA for Camp Lejeune from their Web site. According to ATSDR, the PHA should have mentioned benzene contamination and stated that the extent of exposure to benzene was unknown. The ATSDR is currently conducting water modeling as part of an ongoing study to determine if past exposure to VOCs from contaminated drinking water at Camp Lejeune is associated with certain birth defects and childhood cancers. After the water modeling is completed, the ATSDR will re-analyze and update the PHA. Persons interested in reading the 1997 PHA may request a printed copy by contacting the ATSDR Records Center at (770) 488-0707, or e-mail: atsdrrecordscenter@cdc.gov.

In 1998, the ATSDR completed a birth outcome study of women who conceived or gave birth to children aboard Camp Lejeune. The ATSDR concluded that drinking water contaminated with VOCs may be associated with decreased average birth weight-for-gestational-age births in infants born to mothers over the age of 35 or in women who had a history of adverse pregnancy outcomes. The ATSDR qualified the associations and warned that results must be interpreted with caution. It also concluded that any possible relationship between VOCs and adverse pregnancy outcome(s) needed additional study.

As a follow up action to the study of birth outcomes, the ATSDR began a survey in fall 1999. The survey’s overall goal was to identify cases of specific childhood diseases among children born to women who became pregnant while living in base housing at Camp Lejeune from 1968 to 1985. During the survey, the ATSDR administered a screening questionnaire to 12,598 former residents of Camp Lejeune to identify specific types of childhood illnesses. The telephone-screening phase of the project ended January 26, 2002. The ATSDR evaluated the self-reported cases of certain childhood illnesses and other health-related information.
In January 2003, the ATSDR released an interim report on the survey results and mailed this report to survey participants and interested parties. The survey interviews provided specific childhood cancers and birth defects. To verify the self-reported health conditions, the ATSDR reviewed medical records of selected respondents and/or interviewed physicians that provided diagnoses of health conditions. Once cases were verified, the rates for childhood cancer and birth defects of interest were compared to the rates for a comparable population. These comparison findings are published in the ATSDR’s final survey report.

Updated information about the survey and any follow-up study will be provided as it becomes available.
Posted by Legal Support Investigative Service at 9:02 AM No comments: Links to this post

Website link to: THE FEW, THE PROUD, THE FORGOTTEN 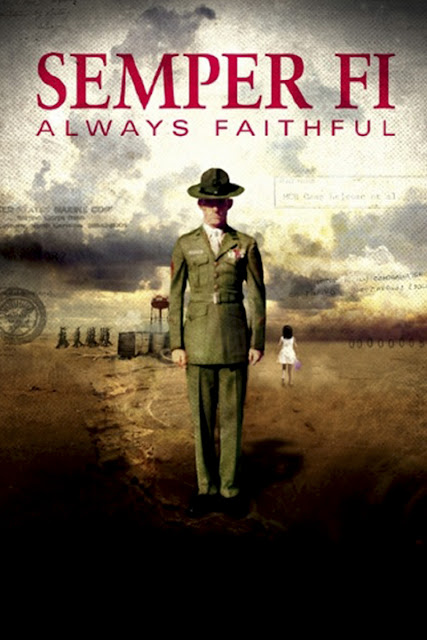 Website LINK: >>> The Few, The Proud, The Forgotten
Posted by Legal Support Investigative Service at 8:53 AM No comments: Links to this post

The Few, The Proud, The Forgotten - Camp Lejeune Toxic Water

Posted by Legal Support Investigative Service at 8:40 AM No comments: Links to this post