Social networks not private in court

Social networks not private in court
Judge rails against notions of secrecy
By Ben Present, The Legal Intelligencer
Even without appellate case law in Pennsylvania to provide guidance on the discoverability of information on Facebook, the standard is becoming clear: Post at your own risk.
Three courts in this state have now decided that, if a party in a civil case posts information on his Facebook page, and that information appears to contradict statements in discovery or testimony, then the party's Facebook page falls within the scope of discovery.
In the most recent case, Largent v. Reed, a Franklin County judge ordered plaintiff Jennifer Largent to turn over her Facebook username and password to defendant Jessica Rosko, who allegedly caused an auto accident that left plaintiffs Jennifer and Keith Largent with "serious and permanent physical and mental injuries."
The decision came in Common Pleas Court Judge Richard J. Walsh's 14-page opinion, the beginning of which reads like a debriefing on the world's most popular website. According to Judge Walsh, Ms. Largent's Facebook page brought up questions about the extent of her injuries.
According to the opinion, the Facebook page reveals Ms. Largent posted about going to the gym, despite testifying that she needed to walk with a cane. Pictures on the website show Ms. Largent "enjoying life with her family." Judge Walsh pointed to these examples from the "public" profile that helped satisfy the slight relevancy standard the defense needed to probe the rest of her page. The plaintiffs filed negligence and loss of consortium claims.
Judge Walsh said there can be "little expectation of privacy" on a social networking site.
He said no court has ever recognized a "general privacy privilege" for Facebook information, "and neither will we."
The opinion, which also warns readers of the "dark side" of social media, opens with Facebook's long-standing motto -- "Facebook helps you connect and share with the people in your life" -- and goes on to quote the site's policy on responding to legal requests, preventing harm and sharing user's information.
"Only the uninitiated or foolish could believe that Facebook is an online lockbox of secrets," Judge Walsh said.
Judge Walsh said making a Facebook page "private" does not shield it from discovery because even private posts are shared with other people.
Leonard Deutchman, who writes a cyber law column for the Law Weekly, said the decision is more narrow than some of the leading federal case law dealing with Facebook, because the defendant in this case is seeking information directly from the plaintiff.
Ben Present: 215-557-2315 or bpresent@alm.com. To read more articles like this, visit www.thelegalintelligencer.com.
First published on November 28, 2011 at 12:00 am
Posted by Legal Support Investigative Service at 12:27 PM No comments:

I think a Happy Festivus Pole would have been a heck of a lot cheaper! 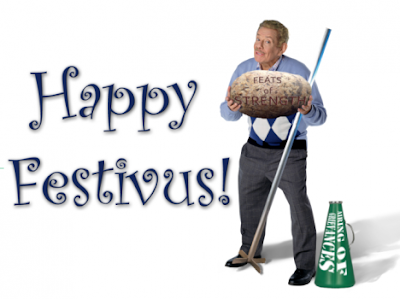 By Jenny Deam, Los Angeles Times
Reporting from Colorado Springs, Colo.—
In the still of a cold November evening, a small gathering of pagans, led by two witches, begins preparations for the coming winter solstice. But these are not just any pagans, and this is not just any setting. They are future officers of the United States Air Force practicing their faith in the basement of the Air Force Academy's cadet chapel.

Their ranks are slim. According to the academy's enrollment records, only three of 4,300 cadets identified themselves as pagans, followers of an ancient religion that generally does not worship a single god and considers all things in nature interconnected.

Still, the academy this year dedicated an $80,000 outdoor worship center — a small Stonehenge-like circle of boulders with propane fire pit — high on a hill for the handful of current or future cadets whose religions fall under the broad category of "Earth-based." Those include pagans, Wiccans, druids, witches and followers of Native American faiths.

Witches in the Air Force? Chaplain Maj. Darren Duncan, branch chief of cadet faith communities at the academy, sighs. A punch line waiting to happen, and he's heard all the broom jokes.

For the record, there are no witches among the cadets this year. But the two spiritual leaders for all Earth-based religions — one a civilian, one an Air Force reservist — are witches and regularly cast spells, which they say is not so different from offering prayer. There also are no druids this year. But there could be next year.

"We're here to accommodate all religions, period," Duncan says. The building of the Cadet Chapel Falcon Circle on the hilltop, he says, is no different from the past conversion of chapel rooms into worship spaces that serve this year's 11 Muslim, 16 Buddhist and 10 Hindu cadets. There are also 43 self-identified atheist cadets whose beliefs, or lack of them, Duncan says are also to be respected.

"It is very nice to have our own space," says Cadet 1st Class Nicole Johnson, a 21-year-old senior from Florida who became a pagan after entering the academy.

This is not about religious tolerance — a phrase Duncan, a Christian, rejects as implying that the majority religion is simply putting up with the minority. He calls it a 1st Amendment issue. If the military is to defend the Constitution, it should also be upholding its guarantee of religious freedom. "We think we are setting the standard," Duncan says.

In addition to providing worship space, new policy dictates that all cadets take courses in understanding the religions of those who may someday fall under their command. Recently he's fielded calls from West Point and Annapolis about replicating the Air Force's efforts.


In 2005, the Air Force — still reeling from accusations of sexual assaults against female cadets at the academy — was accused in a lawsuit of allowing aggressive proselytizing toward non-Christians. The suit, ultimately dismissed, was brought by an attorney and academy graduate, Michael Weinstein, who founded the Military Religious Freedom Foundation and has continued to fight what he calls aclimate of religious oppression at the academy.

Weinstein isn't buying this new spirit of "Kumbaya." He says he has received hundreds of complaints from cadets who allege pressure by other cadets or superiors to profess faith in Christ and cites a desecration incident in 2010 when a cross was left at a previous Earth-based worship site. The Air Force condemned that incident, and it was never discovered who was responsible.

Weinstein says the presence of the powerful fundamental Christian organization, Focus on the Family, just a short hop down the highway from the academy only adds to tension for non-evangelicals.

Meade Warthen, a civilian spokesman for the academy, stands by the academy's efforts, adding that it takes heat not only from critics like Weinstein but also from those who say it does too much to accommodate other religions.

Back at the solstice preparations, with glue guns drawn and takeout pizza within easy reach, the pagan cadets decorated yule logs with bits of ribbon and glitter. Yule logs, whose ritual burning symbolizes faith in the reappearance of the sun, will be displayed alongside the Christmas trees and menorahs in next month's crowded religious calendar at the academy.

And though Johnson acknowledges that her beliefs are often misunderstood, she says she has taken no serious grief from other cadets, save occasional questions about whether pagans dance naked (she doesn't) or whether she can cast a spell on commanding officers (she wouldn't even if she could).

The rule is no spells cast without someone's permission. There is a prevailing tenet of her faith, she says: Do as you will, but harm no one.
Posted by Legal Support Investigative Service at 6:55 PM No comments: