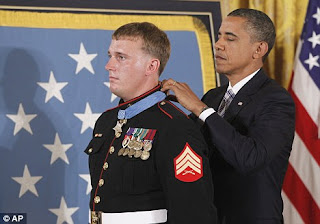 Dakota Meyer, the first living marine to receive a Medal of Honor, wants to be a New York City firefighter. The only problem is that he missed the deadline.
Meyer missed the Sept. 19 deadline because of activities surrounding his Medal of Honor win, his attorney said. The next time he can apply is in four years, attorney Keith Sullivan said.
Sullivan filed an application Saturday for the city to extend the application period for a short window so that Meyer could apply.  A federal judge refused the idea of opening the window to all and instead said Monday that only Meyer’s application would be accepted. That didn’t sit well with the former marine who was awarded the Medal of Honor by President Obama on Sept. 15.
“My client is not willing to submit an application where he’s the only one getting that benefit. He doesn’t feel he warrants extraordinary treatment,” said Sullivan.  “We would not be amenable to a one person exception at this time, he is declining the offer as he feels it would compromise his values and principles.”
While Meyer might not feel he deserves extraordinary treatment, his courage while serving in Afghanistan was extraordinary.
He still insists he’s not a hero for rescuing 36 American and Afghan troops during a mission in eastern Afghanistan in Sept. 2009.  Positioned in a rear position when an ambush began, Meyer and other members of his unit disobeyed orders to remain in place and used a Humvee to rush into the kill zone to try and rescue four American trainers trapped at the head of their column. Fighting through a piece of shrapnel that had injured his arm, Meyer later reached the four only to find that they had died in the fighting.

Ray Tamarra/FilmMagic/Getty Images
In an interview with ABC’s Bob Woodruff , Meyer said that he was only doing “what marines do…I’m the furthest thing from a hero.”
Meyer wears bracelets with the names of the four Americans killed in Ganjgal that day and feels some guilt that he survived the battle.  “I guess what’s stuck in my mind is you either get guys out alive or you die trying, if you didn’t die trying, you didn’t try hard enough.”
The 23-year-old Kentucky native revealed his dreams of being a New York City firefighter to the New York Post  over the weekend after throwing out the ceremonial first pitch at a New York Mets game. He told the paper, “It’s something I’ve always wanted to do. It’s a way I feel I can do my part in giving back to America.”
For now, his attorney still hopes that city officials can come up with a way to reopen the application window for all so that Meyer can become a firefighter.
“I have already asked the city to go back to the drawing board,” Sullivan said. “The city’s burden pales in comparison to the burdens and compromises Sgt. Meyer has made for this county. We as a city and country deserve to put in the effort to make this dream possible and he shouldn’t have to wait four years.”
ABC News’ Luis Martinez contributed to this report.

Posted by Legal Support Investigative Service at 10:15 AM No comments: Links to this post

Saudi Woman to Get 10 Lashes for Driving a Car

Saudi activists say a court has sentenced a Saudi woman with 10 lashes for defying the kingdom's ban on women driving.
Activist Samar Badawi says Shaima Ghassaniya was found guilty Tuesday of driving without the government's permission.
No laws prohibit women from driving, but conservative religious edicts have banned it.

AP
FILE - In this Friday, April 29, 2011 file... View Full Caption
The ruling comes just two days after Saudi King Abdullah announced that, for the first time, women have the right to vote and run in the country's 2015 local elections.
Najalaa Harriri, who is also facing court for driving, told The Associated Press she needed to drive to take better care of her children.
Tuesday's verdict is the first of its kind in Saudi Arabia. Other women were detained for several days, but had not been sentenced by a court.

http://abcnews.go.com/International/wireStory/saudi-woman-10-lashes-driving-car-14615694
Posted by Legal Support Investigative Service at 10:12 AM No comments: Links to this post

Should Faking a Name on Facebook Be a Felony?

Should Faking a Name on Facebook Be a Felony?

Imagine that President Obama could order the arrest of anyone who broke a promise on the Internet. So you could be jailed for lying about your age or weight on an Internet dating site. Or you could be sent to federal prison if your boss told you to work but you used the company's computer to check sports scores online. Imagine that Eric Holder's Justice Department urged Congress to raise penalties for violations, making them felonies allowing three years in jail for each broken promise. Fanciful, right?
Think again. Congress is now poised to grant the Obama administration's wishes in the name of "cybersecurity."
The little-known law at issue is called the Computer Fraud and Abuse Act. It was enacted in 1986 to punish computer hacking. But Congress has broadened the law every few years, and today it extends far beyond hacking. The law now criminalizes computer use that "exceeds authorized access" to any computer. Today that violation is a misdemeanor, but the Senate Judiciary Committee is set to meet this morning to vote on making it a felony.
The problem is that a lot of routine computer use can exceed "authorized access." Courts are still struggling to interpret this language. But the Justice Department believes that it applies incredibly broadly to include "terms of use" violations and breaches of workplace computer-use policies.
Breaching an agreement or ignoring your boss might be bad. But should it be a federal crime just because it involves a computer? If interpreted this way, the law gives computer owners the power to criminalize any computer use they don't like. Imagine the Democratic Party setting up a public website and announcing that no Republicans can visit. Every Republican who checked out the site could be a criminal for exceeding authorized access.
If that sounds far-fetched, consider a few recent cases. In 2009, the Justice Department prosecuted a woman for violating the "terms of service" of the social networking site MySpace.com. The woman had been part of a group that set up a MySpace profile using a fake picture. The feds charged her with conspiracy to violate the Computer Fraud and Abuse Act. Prosecutors say the woman exceeded authorized access because MySpace required all profile information to be truthful. But people routinely misstate the truth in online profiles, about everything from their age to their name. What happens when each instance is a felony?